ON THE GO IMAGING WITH A PORTABLE MRI SCANNER – IS IT POSSIBLE?

We’ve written at length about different MRI technologies and new innovative techniques that aim to improve the quality of imaging. Some of these include modifying existing MRI scanners to make their use possible for neonatal imaging ("CINCINATTI CHILDREN’S HOSPITAL IS USING INFANT MRI FOR ADVANCED DIAGNOSTICS"). Other popular advancements are Tesla-driven MRI improvements which aim to increase the power of MRI magnets, which we showcased in the articles about 7T and 20T ("7 T MRI: IS IT WORTH IT?") ("DOES THE WORLD NEED A 20 T MRI MACHINE?").

In the world of technology, everything is going mobile, everything from phones to medical equipment. Now mobile and portable devices are available quicker and are speedily gaining the same multitude of features available on stationary computers, in the case of mobile phones and now portable MRI scanners which could have the same features as conventional MRI systems in the future. We will also look at the MagViz, a portable MRI scanner that was developed in the Los Alamos National Laboratory, an institution famous for important discoveries and innovations in different spheres. In the realm of science, a discovery in one field is sometimes useable or even more valuable in other fields, often unexpectedly.

What MRI technology is needed to create a portable system?

This is a key question that stumped scientists until teams around the world started looking into SQUIDs. SQUIDs are superconducting quantum interference devices that are extremely sensitive to changes in magnetic fields. In the 7T and 20T articles mentioned above, we discussed in detail how ultra-high field (UHF) systems are being developed. From the beginning it was clear that the same magnetic power was not going to be possible any time soon, which forced teams to look at and eventually adopt ultra-low field (ULF) MRI technology. Most of these magnets have a field that is equal to or even less powerful than Earth’s, which is why SQUIDs are so invaluable.

Is portable and mobile the same thing?

Here, it is also important to make the distinction between portable and mobile. Philips Healthcare has a mobile 3.0 Tesla system that easily fits in the trailer of a semi-truck. This is obviously by no means portable, because it requires a tractor trailer and a large energy source. A truly portable MRI scanner should be <100 kg and the energy requirements should be minimal. In other words, a mobile device is something that is affixed to a car, or truck, but a portable device is something you can carry around and if necessary move anywhere you want. 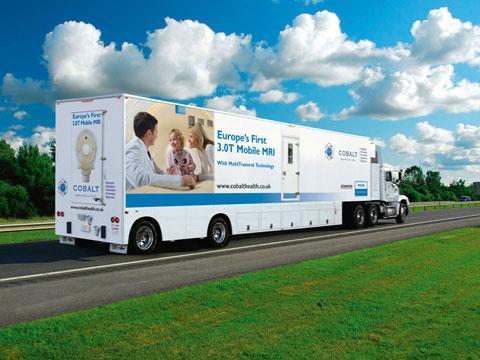 Although scientists have approached the technological side from different angles, the most promising seem to be SQUIDs. Apart from them there are multiple designs for optical systems and laser technology that would take the place of a detector, SQUIDs are cheaper and more compact. They also offer some serious advantages in terms of safety. High-power magnets need a lot of maintenance, like cooling and shielded facilities that protect the integrity of the magnetic field. A magnet with an ULF, on the other hand, completely bypasses most of these hang-ups.

Where the portable MRI could really shine is on the battlefield or in remote places where there is simply no immediate access to a conventional MRI scanner. This MRI technology isn’t theory, there are multiple prototypes in development right now and some designs, like the MagViz, which have been used for purposes other than medical imaging. Like ultrasound machines and other medical devices that were once seen as only stationary, MRI is going portable, and the sky’s the limit beyond that.

MagViz and the conundrum of explosive liquids

MagViz was designed and developed by a team from Los Alamos National Laboratory, which is famous for being a melting pot of innovation spanning many disciplines and aspects of human life. The initial purpose of the project was to develop a portable MRI scanner using SQUIDs and an ULF magnet for medical imaging. But what it eventually ended up being used for was liquid detection in airports. After an incident in the United Kingdom, where terrorists attempted to get liquid explosives on a plane, the U.S. Department of Homeland Security (DHS) deemed it necessary to patch a significant hole in security protocols for liquids. The Los Alamos team jumped on the chance to make their prototype compatible with the DHS requirements and presented the MagViz.

At the time, only special x-ray scanners were in place, which are totally incapable of distinguishing between liquid densities. MagViz stood out as a total solution to this conundrum and with software that automatically highlights suspicious liquids, and may soon be adopted by airports around the world. So with this you might think that the MagViz cemented its place in the portable MRI area, but Los Alamos has one-upped itself. It is now developing the so called CoilViz, a device with a coil that is considerably more compact than its sister, the MagViz. Although the accuracy takes a hit, it’s still more than enough to warrant DHS approval.

So adapting the MagViz further with technical fixes has made it useable for security purposes, but is it still able to image the human body? The answer is yes! With minimal tweaks it is still able to diagnose many illnesses and pathologies. What makes it even better than MRI in terms of battlefield and military hospital use is that it won’t rip out metal objects, like shrapnel, which is possible when imaging with a conventional MRI. Obviously the quality isn’t the same, but it’s fairly CLEAR that at the current stage in development, that is just not possible.

What we have to look forward to

Advancing at practically light speed, scientific developments are paving the way for ease of use, availability and accuracy. Portable MRI technology isn’t being left behind either; it is now very clear that there will be a market for such MRI scanners and remote areas of the world, as well as other applications will certainly benefit from these innovations.