Transient elastography is a modern non-invasive method for liver scanning which allows quick determination of the degree of connective tissue growth. This procedure does not require any special patient preparation but has higher informational value compared to traditional liver examination techniques: ultrasound, biopsy, AST, or ALT.

Unlike biopsy, transient elastography does not require surgical intervention and allows study of the entire organ thus providing a complete image necessary to establish a correct diagnosis. Whilst ultrasound investigations and biochemical blood tests are not very informative in the early stages of the disease, transient elastography provides a possibility to determine the degree of normal tissue substitution by connective tissue long before disease exacerbation.

How is transient elastography carried out?

The procedure is carried out with a special Fibroscan device, whose operational principle resembles that of an ultrasound scanner. The machine uses elastic waves to determine the degree of hepatic tissue elasticity in different parts of the liver.

The ultrasound sensor detects the elastic wave propagation speed in the patient’s liver. Then the machine processes the obtained information and displays the relevant values ​​in kilopascals on the screen. A doctor interprets the examination results using the METAVIR system according to a scale from F0 to F4. The higher the value, the more advanced the disease progression is.

Fibroscan utilization provides a possibility to accurately determine liver density. The machine measures the elastic wave passage speed through liver tissue in different places. The human factor is excluded because tissue density is an exact physical parameter which reflects the degree of fibrosis  and is calculated by the device with no manual intervention. The diagnostics procedure duration is 5-15 minutes.

The procedure duration, the obtained results informational value, the transient elastometry accuracy, and the patient’s comfort depend on the Fibroscan device. Among all the companies specializing in hepatology equipment production, the French manufacturer Echosens stands distinctive. The company was founded in 2001 and is considered to be a pioneer in transient elastography.

Today, Echosens owns 17 patents in hepatology hardware, and the French elastometry equipment is acknowledged to be the best on the market. The company offers FibroScan FS 402 portable machine and FibroScan 502 Touch stationary machine both of which provide an objective fibrosis assessment in the following cases:

Echosens Fibroscan machines are designed both to diagnose and permanently monitor the patient’s condition and to correct treatment procedures when needed.

FibroScan FS 402 – a portable scanner with a simple interface

The scanner operation is based on the Echosens proprietary technology named Vibration Controlled Transient Elastography. Fibrosis degree assessment is performed using a special M-probe sensor, which allows a painless tissue examination in a volume that exceeds the conventional biopsy possibilities. 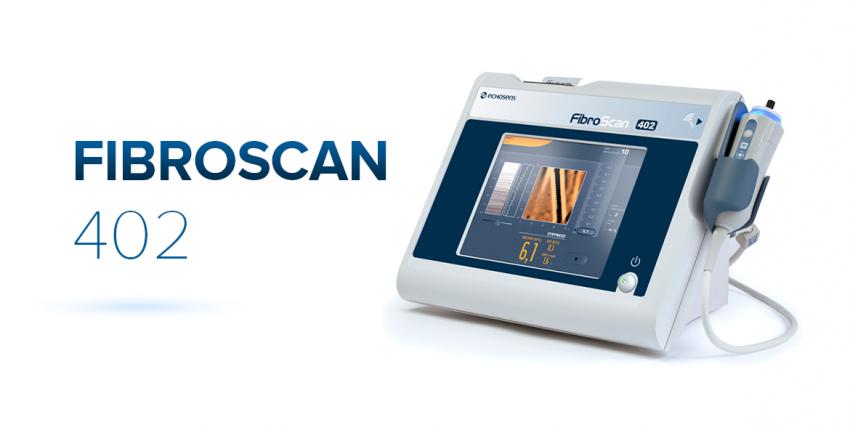 A compact machine is a perfect choice for medical diagnostic centers and private clinics. The device weighs only 8 kilograms and all you have to do to use it is to connect it to a power supply. The device is controlled with a sensitive touch screen. The screening procedure takes just 5-10 minutes, and the results are instantly printed using the built-in printer.

The scanner operation is based on the Echosens proprietary technology named Vibration Controlled Transient Elastography. The tissue volume which the device is able to examine substantially exceeds the similar biopsy index. The investigation inaccuracy does not exceed 0.5 kPa. The measurements are performed using a powerful third-generation M-probe ultrasonic sensor with a working frequency of 3.5 MHz. The entire procedure takes about 5 minutes and is absolutely painless.

FibroScan 502 Touch is equipped with a large 17” touch-screen display. The device structural system and its design make screening procedures convenient and comfortable for both a doctor and patient.

Nowadays, we can declare with certainty that transient elastometry is a safe and comfortable, alternative to biopsy, screening examination. With modern Fibroscan devices, liver disease diagnostics has become a simple and affordable procedure. Such manufacturers as Echosens constantly improve their medical equipment, and thanks to it, patients are provided with the opportunity to reveal pathological changes in a timely manner, and doctors are sure to assign effective treatment.